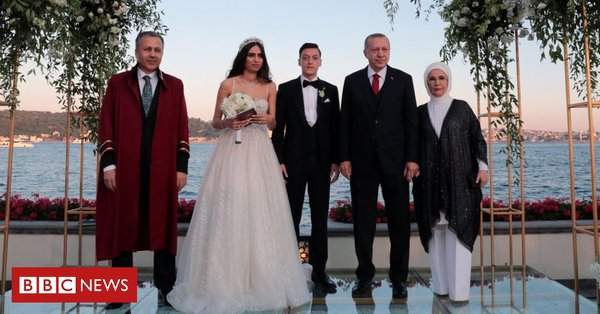 According to BBC news report, Ozil, who has Turkish background, caused a stir on the social media uploading pictures with Erdogan ahead of last summer's World Cup in Russia.

However, he retired from international football, citing the "racism and disrespect" he suffered after photos went viral in Germany.

The 30-year-old Ozil tied the knot with his fiancee, ex-Miss Turkey Amine Gulse, at a prestigious hotel near the banks of the Bosphorus.

Interestingly, Ozil and his better half started dating in 2017, but made it pubic in June 2018.

In March, Ozil hinted that he requested Erdogan to be his best man - which, again, created tension in Germany.

Helge Braun, German Chancellor Angela Merkel's chief of staff, told Bild newspaper at the time that it "makes one sad" that Ozil would make such a choice, following the treatment he received after meeting with the Turkish president in 2018

Nice one. Thanks for the Information
(Quote) (Likes)
Nsofor Chizoba

That's so nice of him
(Quote) (Likes)
Joyce Nyawosa Tukura

This is what I call humility
(Quote) (Likes)
Munchiri Nchisah Musa